WireGuard on a router


In this guide, we walk you through the steps to set up and run WireGuard® on a router.

If you run into any issues while testing WireGuard, please contact support@mullvad.net and let us know what you experience.

Installing OpenWrt on your router (Version 21.02.3 has been used here)

First, check OpenWrt's list of supported routers to make sure yours is included.

Installing WireGuard and Mullvad on your router comes with some benefits:

What you need in order to proceed:

Update the router's firmware to OpenWRT

Follow your router's instructions on how to connect and update the firmware to the OpenWrt firmware that you previously downloaded.

The router normally displays some status information and then restarts. Take extra care in downloading the correct version since doing this incorrectly could "brick" your router, making it completely unusable.

2. In the Download and install package field enter: luci-proto-wireguard and click OK, click Install. Then Dismiss the windows when installed. Repeat and make sure wireguard-tools is installed also.

3. Click System - Reboot (Make sure to reboot the router otherwise other steps will most likely fail)

If you do not have a public/private key pair to use with WireGuard, then you can use SSH to connect to the router as described earlier, and run:

If you're running WireGuard on multiple devices, generate a separate key pair for each device. Also make sure to connect the router to a unique server that you do not use on other devices that will be using the router's VPN. You will otherwise run into connectivity issues.

Getting an IP to use with Mullvad

While connected to the router using ssh:

The IP:address to use with Mullvad will be returned.

In the main menu, select Network- Interfaces and then click on "Add new interface". Name the interface  WGINTERFACE and select Protocol WireGuard VPN and press Create interface in order to start configure the new interface. 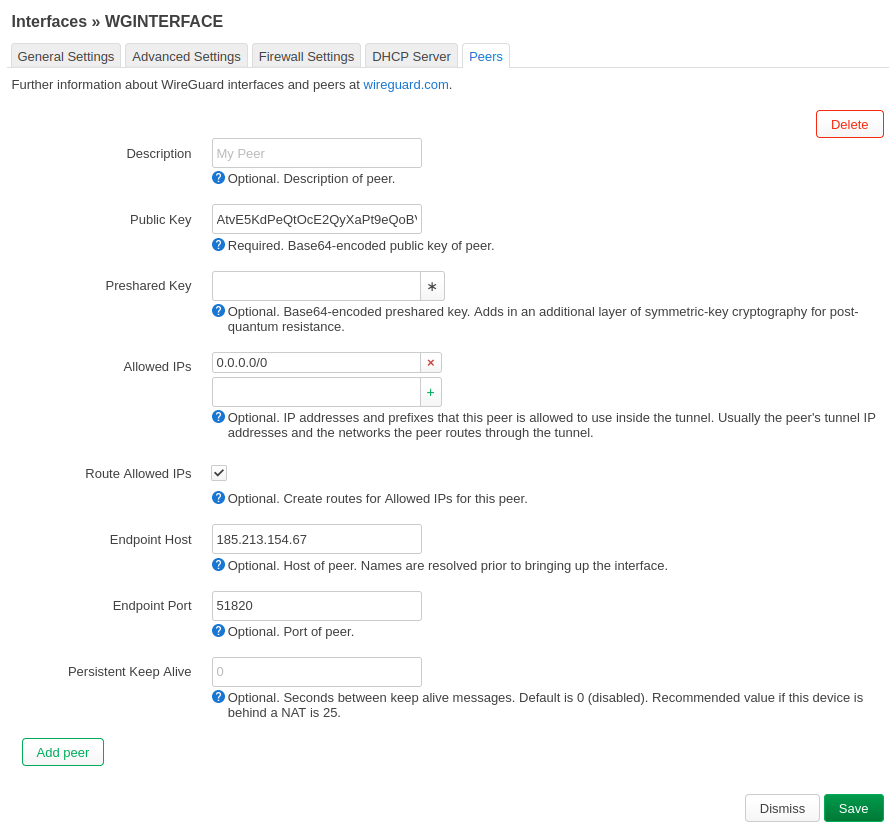 Click on the Advanced Settings tab and check the box next to "Force link". Leave the other options on this page as is (Setting does not exist on some versions)

Save and apply settings!

Under Zones. Create a new zone and set it up as shown below. We named ours "WGZONE".

Click on Edit the lan zone and set "Allow forward to destination zones" to WGZONE:WGINTERFACE" as the only option under allowed destinations.

Under Network go to the DHCP and DNS settings. 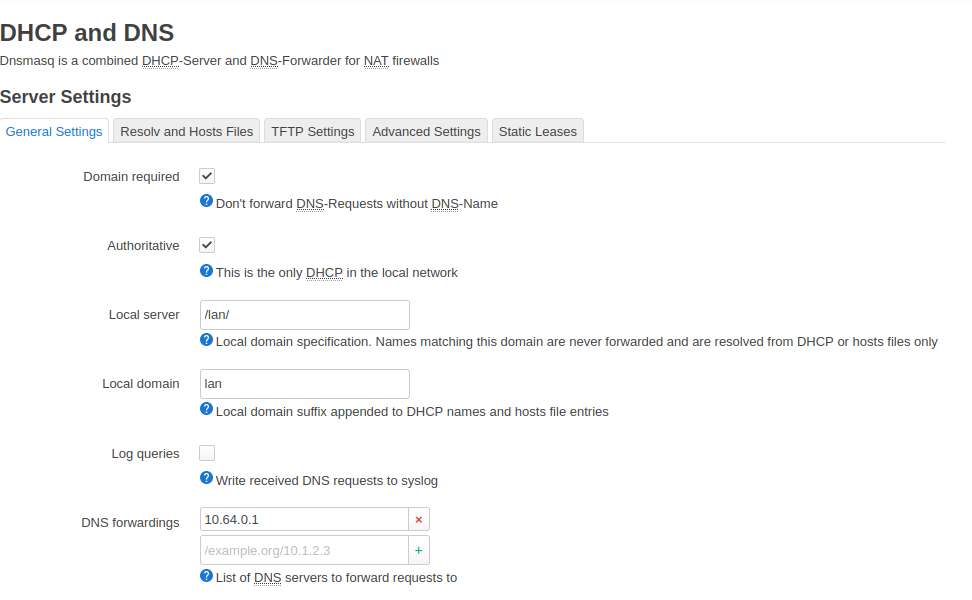 (If you'd like to learn more about DNS leaks, check out our guide on DNS leaks.)

Use our Connection check to see which IP address you are using. It should be one of Mullvad's and not your own.

Adding a watchdog will ensure that the router restarts if anything stops working.

Important: Complete this step only after you have confirmed that the router is working properly.

Use SSH to log in to the router and add the file wg-watchdog.sh (provided below) in /root using nano.

Then run the command nano /root/wg-watchdog.sh.

With WireGuard you can make use of multihop, which routes your Internet traffic through an entry server to an exit server, instead of using only an exit server.

See our WireGuard SOCKS5 guide to learn how to use a SOCKS5 proxy in a web browser. You can find the SOCKS5 proxy addresses in our Servers list, for example us10-wg.socks5.relays.mullvad.net.

To allow resolving the internal IP address of the SOCKS5 proxy you may have to disable "DNS rebind protection" in OpenWrt under Network > DHCP and DNS.

If the router is leaking the DNS servers from your Internet provider then try to change some of the following settings and then restart the router and the computers/devices in the local network that are connected to the router.

To find out which version of WireGuard you have running, SSH to the router and issue the command dmesg | grep -i wireguard.io.

Restart the router. Some settings, like the watchdog and adding the WireGuard interface, need a restart in order for changes to be applied.

Important: Your router needs to have the proper time and date, otherwise you'll likely run into connectivity issues.

"WireGuard" is a registered trademark of Jason A. Donenfeld.