We've got quite a laundry list of changes to the newest stable release of the Mullvad VPN app. Most exciting is our in-app integration of the Shadowsocks proxy!

Use Shadowsocks in the app

Connecting with bridges using the Shadowsocks proxy can now be done directly in the app and is even fully automatic. You can find the Bridge mode options under Advanced settings (scroll down). 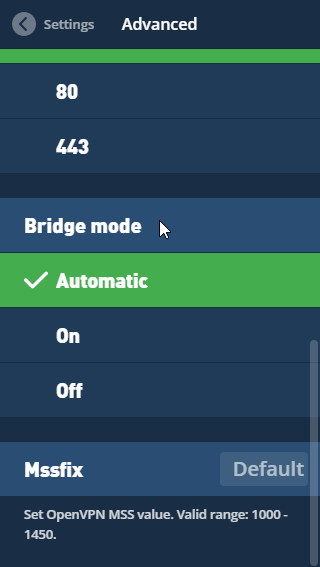 The default mode is set to Automatic which means that if the app fails to connect three times (often a sign that you're stuck behind a censorship firewall), it will then attempt a bridge connection.

Once connected, you'll be able to see the bridge details on the connection screen.

The app now supports Dutch, Italian, Japanese, Norwegian, Portuguese, Russian, and Turkish. The language will be automatically determined based on your computer's language settings.

In addition, the city and country displayed on the connection screen are now displayed in that particular language instead of defaulting to English.

When using WireGuard, you can now roam between different WiFi's and other connections.

For macOS users with iPhones connected to the same network, those iPhones are now discoverable when the Local network sharing option is enabled.

Download now the Mullvad VPN app for Windows, macOS, and Linux users. We've got set-up guides if you need help with installation and usage.

Know of someone unable to access our website? Point them to Mullvad's onion address on Tor or Mullvad's GitHub page.