If you're experiencing slow internet traffic, it may be because your internet service provider (ISP) is engaging in bandwidth throttling. This guide explains what that is and what you can do to mitigate the problem.

What is bandwidth throttling?

Mullvad encapsulates your traffic in a VPN tunnel, this means your ISP can not down prioritize based on the content you are accessing.
However they can still throttle based on the VPN protocol that is used to connect to our server or the peering to our server.

Why would my ISP actively throttle my traffic?

There are various reasons your ISP might do this:

What can I do to mitigate throttling?

First of all, if your ISP throttles traffic at certain hours, or because you've used a lot of data, or because their connectivity just isn't big enough, there's not much you can do. Other than switching to a better ISP.

However, if you're trafficking large amounts of data but at a seemingly slow speed, there's a workaround worth trying – switching from UDP to TCP.

UDP and TCP are two types of network protocols. UDP is often transmitted faster which is why it's used for video streaming, torrents, and online gaming. But this means that some ISPs tend to automatically throttle this type of traffic.

So using a VPN that allows you to force all your traffic to use TCP is one way of mitigating this issue.

How to get faster speeds

Try switching to TCP. It's quite easy and may significantly improve your connection speed.

In the Mullvad VPN app 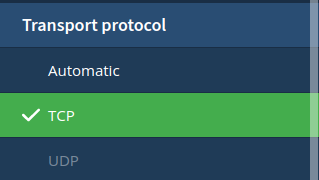 iOS, Android, and other platforms

Download new configuration files that have TCP 443 selected in the Advanced settings (TCP 443 has a higher chance of working than TCP 80).

To use WireGuard over TCP with the Mullvad VPN app

My speed test delivered great results but I still get slow traffic. What gives?

It's possible for ISPs to detect speed tests and therefore prioritize your traffic above everyone else's, thereby making themselves look pretty good. The same provider can then throttle your torrent traffic, leaving you with the impression that they aren't the culprit.

And while congested VPN servers may be a valid concern of yours, we actually operate on overcapacity as we're frequently adding more servers.

"WireGuard" is a registered trademark of Jason A. Donenfeld.